Over the winter of 1953 to 1954, the entomologists found no evidence of a decline in the budworm outbreak. In fact, a new infestation had been detected south of the preciously sprayed areas, in the younger forests of the Miramichi area west of Newcastle. Eventually, 1,141,000 acres were sprayed in the province.

Barney Flieger of FPL was again manager of the project, assisted by H.J. Irving. Frank Webb, Science Service, Federal Department of Agriculture, is the entomologist in charge, and directs the field survey parties and other biological concerns.

Airstrips: Existing airstrips Boston Brook, Budworm City and Rose Hill (now being called Rosehill) and newly constructed airstrips Renous and Sevogle were used in 1954. No new airstrips were built after the end of season. Eighty percent of the spraying was conducted from Renous and Sevogle, with a small amount from the other three. Nictau was not used in 1954. The object was to cover the Miramichi region in south-central New Brunswick. Horne’s Gulch, a small airstrip in northern New Brunswick near the Quebec border ,was used to spray forests in Quebec.

The Renous airstrip was built by Ashley A. Colter’s Diamond Construction Company. At the time there was no road into this then remote area of New Brunswick, thus a 64 plus km road had to be built by FPL using heavy earth moving equipment.

Aircraft
5 Cessna 170 observation planes, leased from Laurentide Aviation, Cartierville, Quebec
42 Stearman, 31 from the U.S. and 11 from Canada, although an unpublished report states 56 Stearmans

Helicopter: A military helicopter was present on standby at the Sevogle airstrip to aid in communication and rescue, but it was not needed during the spray period; no civilian helicopter was available. This helicopter was a Sikorsky HO4S from the Naval Air Facility at Summerside, Prince Edward Island, pictured below. (The Crowsnest, Vol. 6, no. 10, August 1954 (The Royal Canadian Navy’s Magazine)) 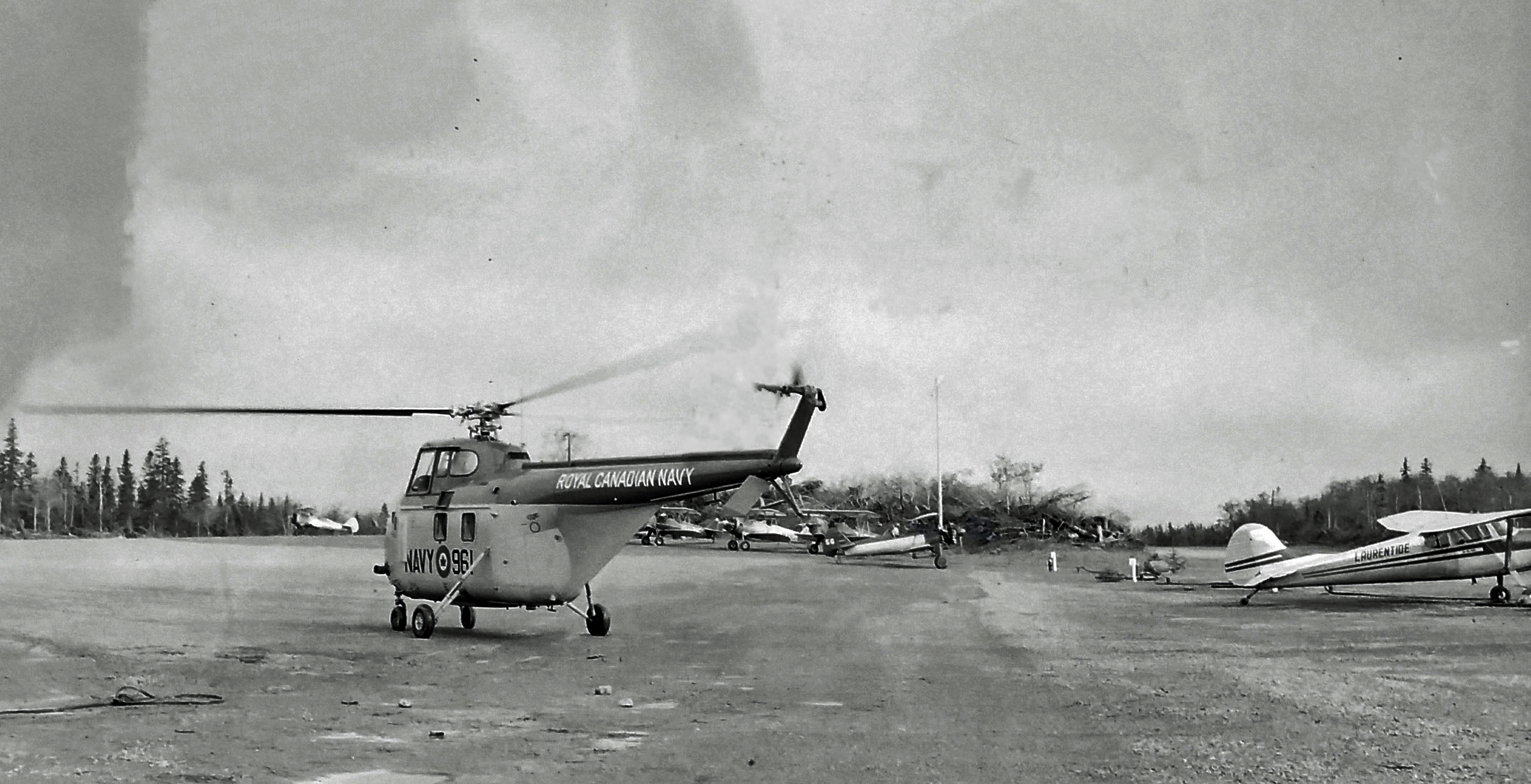 The spray period started on June 8, 1954, which was a bit later than in 1953, and continued for 19 days. Wheeler Airlines of St. Jovite, Quebec, was again the prime contractor, and Stearmans came from all over North America, similar to those in 1953. Unfortunately, very few details are available to determine the aircraft and individuals involved.

H.J. “Bud” Irving was the assistant to Barney Flieger for the New Brunswick operation.

All pilots under contract to Wheeler Airlines of St. Jovite, Quebec, assembled there and received a refresher course in spray techniques in early May. Most of the planes assembled at Montreal’s Dorval Airport in late May and were dispersed to their assigned airstrips after refuelling stops at Quebec City and Mont Joli. Pilots were from the states of Washington, Oregon, California, Texas and Arizona, and the provinces of British Columbia, Ontario and Quebec.

Boston Brook and Sevogle were the first airstrips to become operative, followed later by Budworm city, Renous and Rose Hill. The 1954 operation officially ended at Renous on June 26.

The mosquito ops: Two Stearmans from Wheeler Airlines were assigned to conduct a 40-hour DDT spray of mosquito infested areas in the greater Moncton area, and were based from the McEwen airfield near Newcastle, N.B. A third plane was used for observation. The entire operation took about a week to complete, with the weather playing a significant part. The aircraft left for the spruce budworm project after their job here was completed. [Moncton Transcript, 17 May 1954]

In early July the City of Moncton planned a second mosquito spray. The city again contracted Wheeler Airlines, which agreed to provide two planes from the Mont Joli, Quebec, base from where they stationed after the end of the Quebec operations. A spare Wheeler aircraft suffered a forced landing on a budworm airstrip near Bathurst (possibly Rose Hill) July 27 while on its way to Moncton. The plane taxied the field and then braked, causing it to tip over on its side. [Moncton Daily Times, 5 July 1954] The spray op was completed on August 2, and the next day the two Stearman biplanes left for their base at St. Jovite in Quebec. The spraying was assisted by Voyager 150 owned by Charles McEwen that acted as a guide for the other two. The base of operations was again the McEwen airfield near Newcastle. [Moncton Transcript, 3 August 1954]

It is almost impossible to confirm the presence of aircraft sprayers in 1954, so I have listed some possibles, based on their occurrence across the years 1953 to 1958. FPL literature states that 42 Stearmans worked in New Brunswick in 1954, and some of them would have worked on the Quebec and Maine projects. An unpublished report gives the figure of 56 Stearmans. Below is a list of possible suspects, based on images presumed to be from 1954, grouped together by company. FPL literature from this year does not contain any information of aircraft and pilots.

The aircraft below are those that could have sprayed during the 1954 season, and is presented in numerical order. Much of it needs to be confirmed. “S” after the registration number indicates that the aircraft was based at Sevogle airstrip, based on the image below.

These seven aircraft have appeared in each year from 1953 to 1958. Two of them were used in the first and second mosquito spray operations in the Moncton area.

Dino’s story.  The Telegraph-Journal (Saint John, N.B.) ran a story of one of the colourful characters of the 1954 spray program on 16 June. The headline read Saw Spray Job On Film, Now He’s Part Of It. RENOUS AIRSTRIP (Special) “The scene is Athens, Greece, three years ago. The locale, a movie theatre. Dino Zaglaviras, U.S.-trained pilot engaged in spraying against malaria-bearing mosquitoes in Greek marshlands, is watching the newsreels with fascination. One of the sequences deals with Operation Budworm in New Brunswick, Canada, the first one on the Upsalquitch, out of a bush airstrip now famed as Budworm City. [Probably he saw the Kingsley Brown film.-ed.]

Zaglaviras stays on through the show to see the newsreels a second time. For there on the screen, are planes with spray equipment vastly superior to what he and other pilots working on the Greek spraying project financed by American funds are using. On the basis of this newsreel—which was seen again by Dino and other pilots, spray booms and jets were designed on the spot and installed on the Greek planes adding considerable efficiency to the operation.

Today, Dino Zaglaviras, 25, curly haired and wearing a budworm grown goatee, is among the 16 pilots spraying from this strip. “I kept hearing of the New Brunswick spraying operation,” says Dino, “and nine months ago I came over and got a job with Bradley Air Services of Carp, Ontario, who are supplying some planes to the project.”

Dino learned to fly in the United states in 1947 and 1948, and fought in the Greek civil war. He now lives in Montreal. Strange thing about spraying mosquitoes in Greece is that it was done mostly at night, when the insects come out of their daytime hiding places.

In 1953 it was determined that major areas of neighbouring Quebec should also be sprayed. A five-year program of spraying the St. Lawrence – Gaspé region of Quebec was launched, calling for the construction of an airstrip located on the Patapedia River. DDT was applied on 318,000 acres by 14 Stearman [Webb et al. 1961; Blais et al. in Prebble 1975]. Spraying commenced on June 15 and was completed on June 26. Long periods of “abnormally cold and rainy weather” in the spring and early summer retarded the larval development and thus the start of the spray season. After June 15, weather conditions were favourable and spraying was conducted without interruption until June 26. The Quebec project was operated under the authority of the Quebec Forest Industries Association.

W.L. “Slim” Johnson was the assistant to Barney Flieger for the Quebec operation.

Airstrips: Horne’s Gulch, a small airstrip in northern New Brunswick near the Quebec border, was used to spray forests in Quebec’s Matapedia Valley and Gaspé, as well as the newly constructed Patapedia airstrip in the Patapedia Valley just over the Quebec border. Eight Stearmans operated from Patapedia and six from Horne’s Gulch. Stearmans, with their powerful 450 hp engines, were most effective in the terrain of steep slopes and narrow valleys in this part of Quebec.

In subsequent years, “extensive airstrip construction in Quebec was necessary, with six more fields — Laverendrye, Nouvelle, Farm Lake, Cap Chat, Pabos and Lesseps — being carved out of the bush. Along with existing airfields at Rimouski, Gaspé, Matane and Murdochville, they came to form an extensive grid of bases, some 30 to 50 miles apart, which covered the entire region.” The five-year program with the government of Quebec ended in 1958.

Accident: There was only one accident in 1954, and that was in Quebec. “A pilot braked his plane too suddenly to avoid collision with another aircraft, and it flipped over on its back. Wing parts were brought in from Toronto, repairs were made on the spot, and the damaged plane was back in action in five days.” Pilot George A. Mower of Quaadman Dusters, piloting N68461, escaped without a scratch. The accident occurred at Patapedia airstrip on 28 May 1954 (DOT accident card). I don’t know why why an aircraft was spraying in in Quebec in May when the season apparently started in June. Perhaps the date on the card is incorrect?

Helicopter: This helicopter, a 1952 Sikorsky S-55 owned by Kenting Helicopters and registered as CF-HNG and with C/N 55-278, was on standby at Patapedia in 1954.

Also in 1954, the budworm spray program extended south of the border to the Caribou forest in extreme northeastern Maine near the New Brunswick-Quebec borders. Although the area was small — 20,000 acres — it was considered a threat. The Maine spraying was handled by six Stearman from the Canadian fleet. They arrived at Caribou Airport on June 14, 1954, and finished the job in less than four days. This marked the only spraying in Maine until 1958.

Much of the above has come from two Department of Agriculture Bi-monthly Progress Reports, an unpublished report and an article:

Men and materials mass for assault on budworm, by D.W. MacDonald, source unknown.

A history of Forest Protection Limited (1952 – 1992) To protect the forests, by William Seto (Draft Report).

An unpublished report in the FPL files, with no title and no author mentioned, which covered the years 1951 to 1958.

The digital archive of the Telegraph-Journal family of newspapers was also consulted for 1954.

1954 – The Project moves south, and into Quebec and Maine